#BuildBackBetter: You know it makes sense, but how do you do it?

The article was originally published at Vulnerability 360.

Throughout the lockdown, and now an extended lockdown, in our home city, Leicestershire cares staff have been working with a range of community, council, and business colleagues to ensure nobody is left behind. Much of this activity has been delivered by small groups which have formed in response to the pandemic. The lack of red tape, rules, working directives combined with enthusiasm, motivation and human connection all powered by the internet has driven much of this. In April we suggested:

“The reality is events like the pandemic require agile organisations, that are like “speedboats” which can react and manoeuvre quickly. Local authorities and bigger voluntary groups are often like “steamships”. Once they are set on a course they cannot change quickly.”

The recent launch of the #BuildBackBetter campaign, supported by 350 business leaders, community groups and politicians provides a great opportunity to reflect and learn from this experience. As we observed in ‘What’s so funny about peace love and understanding’:

“When our politicians reach outside their sectarian interests and start to engage with people in a meaningful way they discover the public are a huge resource of ideas, expertise, skills and lived experience that can lead to far more effective decision-making. They find that people can hold mixed – sometimes contradictory – views that do not fit neatly into a manifesto but most are willing to reach a compromise. Which is why organisations such as Compass, the RSA and others talk of progressive alliances, building bridges between people and encouraging the growth of bottom up democracy.” 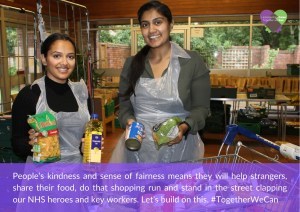 In many ways the lockdown has amplified issues we were already aware of. Inequality, child poverty, food poverty, in work poverty, insecure and in some cases illegal working conditions. Work life balance, environment, run down public services, lack of affordable housing, concerns about physical health and mental wellbeing have all come under the spotlight. Whilst emphasis might vary all the major political parties are talking about “green new deals”, government action to stimulate the economy, protect the poor and why we must create a kinder and more caring society.

The murder of George Floyd in late May and the resulting protest and debates triggered by #BlackLivesMatter fed into the feeling that we are at a critical juncture. Historic injustices had to be righted, the system we currently have is grossly unfair. It systemically discriminates against people of colour whilst evading or hiding how it has benefitted from slavery, colonialism, and racism.

Whilst many public figures got behind this and took a knee, others were more worried. Talk of white privilege and defunding the police was portrayed by some commentators as left wing extremism hiding behind BLM. As statues were torn down and demands grew for more to tumble, some saw this as an attack on the identity and history of the UK. As people marched to protect Winston Churchill statues and share Nazi salutes the one big inclusive community able to achieve consensus seemed like a distant dream.

Yet, polling found only 6% of the British public want to go back to the same economy from before the Covid-19 crisis. Instead people want to build back stronger, greener and fairer. There is significant support for BLM, if not for some of their methods. So, there are reasons to be cheerful and optimistic. I would suggest central to any change should be the “lived experience and voices” of local people shaping the agenda for how their communities develop. As we start to move forward it would be good to see a greater emphasis on:

There are of course many issues that need to be tackled but my strong belief is that if you can root decision making in a local context that people feel connection to and control over, you are far more likely to achieve change. Politicians, business, and community leaders need to see their shared purpose as building better communities. This is far more likely to happen if they work in open, transparent, and respectful partnerships. Where they accept, they all have much to learn from each other and the best way of knowing what the people want is by actively involving them in their decision-making processes.

The pandemic has clearly shown the strengths and shortcomings of our economy and politics. We have much to be proud of but also much we can and must improve. So, lets empower communities, and use their creativity, kindness, and rooted local knowledge to #BuildBackBetter and ensure nobody is left behind.

Kieran Breen is the CEO of Leicestershire Cares and lectures in global issues and young people at De Montfort University.