This article was originally published on the Polity blog

The coronavirus pandemic has exposed and aggravated the economic insecurity experienced by a growing number of members of society.  This may encourage greater understanding of the acute insecurity typically experienced by people living in poverty.  On reflection, I realised that the question of insecurity was a serious omission from the first edition of Poverty.  Thus in the second (updated and expanded) edition, my exploration of ‘getting by’ – one dimension of the exercise of agency in poverty – is placed in the context of insecurity.  This involves not just labour market insecurity and the fluctuating incomes often associated with low pay, but also the everyday insecurity that arises from lacking any kind of buffer against unexpected financial shocks such as a broken washing machine.  Moreover, the anxiety that gnaws at people in poverty (especially women who tend to bear the main burden of budgeting on a low income) reflects not just this everyday insecurity but also what has been described as an ‘ontological insecurity’ stemming from the powerlessness associated with the inability to exercise control over key aspects of their lives. 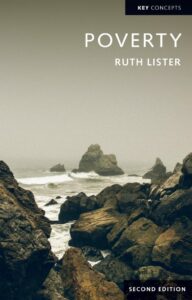 As part of its exploration of agency the book also pays more attention to the range of personal resources on which, research shows, people in poverty sometimes draw in order to ‘get by’, such as emotional resources. Another dimension of agency, discussed in greater depth, is ‘getting (back) at’ or ‘everyday resistance’. A new sub-section pays greater attention to psychological and discursive forms of resistance, which operate at the symbolic/cultural level – both individually and collectively. One example is a project that produced a collection of portraits of people living in poverty, in which they took ownership of their own images, as a deliberate attempt to counter negative stereotypes through recognition of their contributions.

These negative stereotypes are the subject of another chapter that has been able to draw on a wealth of research and first-hand accounts, published in recent years, that illuminate one of the main theses of the first edition: that poverty has to be understood as not just a disadvantaged and insecure economic condition but also a shameful and corrosive social relation. Attention to the psycho-social, as well as the material, dimensions of poverty changes the angle of vision. It points us to the processes of Othering of people in poverty through discourses and representations, including those promoted by the media. These processes also reflect intersecting inequalities of ‘race’, gender and disability. And a psycho-social lens helps us understand better Othering’s effects – stigma, shame, disrespect, misrecognition and humiliation – particularly when we listen to what people in poverty themselves have to say. In the words of one respondent in a cross-national participatory study, ‘poverty is being treated like cattle, you have no dignity and no identity’.

Observations such as these and listening more deeply to people with experience of poverty has brought home to me how Othering can be experienced as dehumanization.  As the late Moraene Roberts, to whose memory the second edition is dedicated, put it: ‘we are neither recognised nor treated as human beings’. This is made more explicit in the second edition. And it informs the discussion of a human rights approach to poverty, which has been expanded.  Drawing on human rights theorizing, I argue for an emphasis on the ‘human’ in human rights – this can be understood as the right to be human and to be seen and treated as human.  From this flows the central human rights principle of dignity.

Together, with a focus on the agency of people in poverty, I argue that human rights offers a counter-narrative to the processes of Othering and dehumanization. An expanded conclusion discusses some of the implications for research, policy and practice.  One theme running through it is the importance of the expertise borne of experience to each of these.  And, as previously, it ends with a call for a dual poverty politics of redistribution and recognition&respect.

The new conclusion lays greater emphasis on the need to integrate such a politics into a broader vision of a good society, addressing also intersecting inequalities and environmental injustice, which is intertwined with socio-economic injustice.  The pandemic has not only increased public awareness of poverty and insecurity, it has also inspired many conversations about how we can ‘build back better’.  I hope that Poverty might contribute to such conversations from the perspective of people in poverty whose voices are still too rarely heard.

Join us for a special event celebrating the publication of this second edition of Poverty. Click here for more details, and to register.