Grace Barnett’s recently published Compass paper, ‘Democracy, Participation and Civil Society‘ contains wonderful examples of pioneers of the “cultural infrastructure for a new democratic settlement”, all with the aim to “create a democratic culture that invites people in”. This blog shares that aim, and would like to propose an additional way of achieving it, by working differently within current structures. 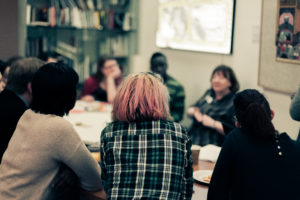 The essence of this approach is simple. It is to seek win-win solutions, refusing compromise, at least to start with, since that means both parties give up something important, so end up in a win-lose position. Here are some contrasting examples.

Bradwell is a village in the Peak District. The one bus (from Sheffield) loops in the village down a narrow lane. It is often blocked by badly parked cars, often belonging to tourists, in the summer, and by locals when conditions are poor. This could put the bus service at risk as several times the bus has been trapped at the pinch point for several hours. The bus bypasses the village whenever there is any real or perceived blockage.

The parish council decided that creating a turning circle was the best solution. Derbyshire County Council offered the bulk of the funding. The parish council organised a village meeting to decide whether to go ahead. Fifty people turned up – an excellent turnout. At the end of the meeting, a vote was held. Seven people voted in favour – but 40 voted against. It then turned out that the seven were bus users, and the 40 weren’t. Reasons given for voting against were the loss of green space that would result from creating the turning circle and the consequent loss of capacity to absorb water in the event of flooding.

The normal approach in the UK is to see a majority vote as final. But another approach would be to see it as information. The next step would be to explore the differences between the two groups. By the way, the term ‘win-win’ was coined by Mary Parker Follett, a pioneering American management consultant at the turn of the nineteenth century. She used ‘difference’ rather than ‘conflict’, to signal that it was not something negative, to be avoided, but simply the interaction of human desires.

What might then happen? The car users might come to understand and sympathise with the needs of bus users, and withdraw their objection. They might together find a way to compensate for the loss of green space. They might have found a solution that the parish council hadn’t thought of.

In our second example, we do have some idea of what might have happened. It concerns a playground called Chippenham Mead in Monmouth. There was a proposal to rebuild it, mainly because it was too close to the polluted A40, also because it had been around since the 1960s.

There were three main stakeholders. First, parents and children concerned about noise and smell at the current site. Second, residents (including people in retirement flats) near the new site. They were worried about noise and about misuse after dark. Finally, the town and county councils were worried that the new site would need planning permission and that objections would lead to a planning inquiry and the need for expensive barristers. The rebuild was to be funded by £85k of Section 106 money, but that was only available for another two years.

We used this issue as the basis of a workshop at the NotWestminster unconference in 2018. We were amazed how quickly people role playing the three groups agreed that the playground should be built on the new site, surrounded by a low fence and by additional trees to minimise noise pollution. Also, money left over should be used to landscape the site of the previous playground to create a path especially designed for older people.

The same approach can be applied at national level. In South Africa, as white majority rule was ending, the black trade unions argued for the nationalisation of industry, overwhelmingly white-owned. It looked as if unions and industry had aims that were diametrically opposed. But when they were able to talk it through, it turned out that the unions were proposing nationalisation in order to fund improved education for the black majority. The industrialists said that they shared this aim. But they asked whether the unions would drop their demand for nationalisation, if they could show that not doing so could produce more funding for education. The unions said they would.

Polls show that 61% of us believe that the UK’s political system discourages cooperation. It doesn’t have to be like that. It really doesn’t. Residents of the city of Rosario in Argentina use marbles to vote on their budget priorities.  On the slip of paper attached to the marbles is printed, “hacienda mas divertida la democracia” – “making democracy more fun”. Why not?

Perry Walker is a founder of Talk Shop. Talk Shop is currently running a series of short, online, free workshops on the win-win approach, and would like to hear from anyone who would like to take part. Contact: perryw@talkshopuk.org

2 thoughts on “Working differently within our current democratic structures”