Is this a new opportunity for realignment in UK politics? With only 11 MPs, polling around 7% and against the backdrop of the COVID-19 crisis, you can see why the media wasn’t paying that much attention to the Lib Dem leadership election. But make no mistake, it matters to the future of progressive politics in the UK a lot.

First because ‘liberalism’ matters. Against populism and statism, the place of the individual and more broadly a healthy civil society, based around robust human rights, are essential to any progressive politics. The nature of liberalism, contested between a more social variant and a more neoliberal version, has for the time being, at least, been settled. Both candidates, albeit in different ways and extents, represent a decisive and welcome break with the Clegg era. Both rejected equidistance and working with the Tories. This leaves them one major party to partner with – Labour.

The party has opted for Ed. He is a safe pair of hands, very good on the environment and definitely of the centre-left of the party. Maybe he will try to demonstrate the end of equidistance precisely because, unlike Layla, he was part of the Coalition. 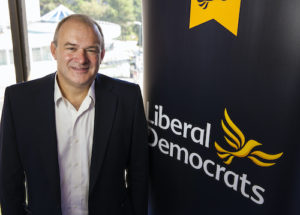 Their in-tray is full and tough. Not least, post Brexit, what defines social liberalism in the 21st century? We’re here to help.

When Compass opened out from being just Labour in 2011 it was still the early years of the Coalition and it was hard to think about cooperation with a party already cooperating so heavily with the Tories. Compass though, never blamed the Lib Dems going into the Coalition, in principle. Labour had no appetite to work with others and the Lib Dems had a chance to influence national events – everyone assumed if they didn’t do a deal there would be a second general election the Tories would walk. When you are continually screwed over by the electoral system it would be a very tough ask not to wield influence on the rare occasions it becomes possible.

In Government the Lib Dems did some good and some bad. Don’t forget that they had a veto over Brexit, stopped other mad Tory policies and pushed through polices like the pupil premium. But the bedroom tax and tuition fees really damaged them. The AV referendum was a mess that did more harm than good. But we have such little experience of coalitions in the UK that there isn’t the practice to draw on. Lots of mistakes were made. We need to learn from them when the best option progressives can currently hope for is a non-Tory coalition of some type.

Here, the onus is on Labour to put the past behind them. Having ruled out equidistance it is time to move on for the sake of the country and progressive politics. Liberals are not socialists, but they can and must compliment each other in terms of ideas, beliefs and electoral reach. And anyway, Labour, the party of the Iraq War, 90-day detention and antisemitism, needs to be careful about claiming any moral high ground.

Given Scotland, there is little or no hope of Labour winning alone. It either leads and shares some power or returns to the wilderness and leaves the country in the hands of the Tories once again. The Lib Dems are second in 91 seats – 80 of them are Tory facing and none where they are a real challengers to Labour. To get the Tories out means the Lib Dems have to win as many of those seats as possible. The electoral maths demands cooperation, whether its tactical campaigning or something more formal. We should be flexible and sensible.

In many cases the Lib Dem targets are soft Tory voters who may never vote Labour – unless Labour goes full New Labour once more. That, to say the least, is unadvisable in a world where neoliberalism is crumbling before our eyes. Starmer clearly helps here in ways that Corbyn didn’t. But letting the Lib Dems soak up these voters, leaves Labour the space to be more radical, inhabiting the terrain between simply saying what you believe, however unpopular, or just parroting what you think the voters want.

But if some kind of progressive government is the best we can expect, then it will take more than electoral cooperation to make it work. While Blair and Ashdown spoke a lot, it was only them and the two parties were never resolved to each other. Relationships have to be deep and meaningful at every level and built now. Compass is already convening a cross-party group from six parties and we are looking at more local group work – where it really matters. Meanwhile ideas like Basic Income, a Green New Deal and a constitutional convention provide the basis for a Common Platform to emerge that sets everyone else up against the Tories.

But cooperation has to be a two-way street. The Lib Dems, like the Greens, should not help Labour unless Labour is willing to cooperate in return. Hence both parties should demand Labour adopts Proportional Representation at its next full policy-making conference. Such a move would spell the end of Tory electoral domination and drag our democracy into the complexity and pluralism of the 21st century. With a strong campaign within Labour for PR, being pushed by Make Votes Matter, Labour Campaign for Electoral Reform and Compass – this could herald the ground-breaking shift the party needs to make.

For now, we should welcome the new leadership of the Lib Dems. We have four years to build a project to change our country and its democracy for good. As ever progressive parties should act now like they are already in government. There is a consensus in the country against the Tories. We should lead it – together. Waiting until the polls force the parties together – when it’s too late – would be another disaster neither party nor the country can afford.

The Lib Dems new direction is a good result not just for one party but for everyone who wants Britain to be better than the shambles it is.