Mark Perryman provides a seasonal round-up of the best books to cheer up the radical spirit.

From #chaoticbrexit to the triumph of Trump via the summertime Labour coup. 2016 will be a year to forget for many  who cling on to an optimism that a better tomorrow remains not only necessary but possible too. The toxicity of racism , the brutal closure of the Calais refugee camp, the political murder of Jo Cox, the human disaster unfolding in Syria and ever-increasing landmass temperatures signalling the onward march of Climate Change.  More than enough to have us all digging into our pockets for the humbugs while giving the holly and the ivy this year a miss. But there’s another side to all of that, for every setback there’s a fightback and in and amongst the mix more than enough to keep at least a semblance of belief in a radically different future. There’s always next year after all.

Britain, across Europe, the USA progressives are now up against a Populist Right, which requires a Populist  Left in response. The Populist Explosion by John  B. Judis is a richly analytical account of the similarities and differences of what this year emerged as a global phenomenon of racist reaction while Europe in Revolt edited by Catarina Príncipe and Bhaskar Sunkara reveal the resources of hope an insurgent European left provides. For the prospects of  ‘what might have been’  read  Our Revolution by Bernie Sanders and imagine what a President Trump-free 2017 might have looked like.

Such an alternative right now however remains at a very low ebb. Books that begin to map out the beginnings of a journey back are needed more than ever. Fortunately 2016 began to provide a good variety of such handy volumes. Now out in paperback Paul Mason’s Postcapitalism  remains for many the best of the bunch and for those who don’t have it already a must-have for any Christmas radical reads shopping list.  A personal favourite for the combination of design, format and writing is ABCs of Socialism edited by Bhaskar Sunkara.  A book to bring the optimist back to earth is The Corruption of Capitalism by Guy Standing, pioneer of the ‘precariat’ analysis, who continues his well-studied research  to reveal the transformation  of work being effected via the rentier economy.  An updated edition of the trailblazing Inventing the Future  from Nick Srnicek and Alex  Williams provides a manifesto of change to counter the miserable terms and conditions Standing’s ‘precariart’  are forced to endure. But of course these conditions aren’t created simply by the world of work, edited by Jeremy Gilbert Neoliberal Culture provides a much-needed breath of critique that takes our understanding of the neoliberalism beyond any tendency to cling on to a workerist model  of explanation.  Taking a similarly broad scope is author Mark Greif, the title of his new book rather gives this away, Against Everything, the perfect seasonal gift for oppositionalists everywhere, not that they will appreciate the gesture, being against such fripperies after all.

After that little lot the season of not enough goodwill and too little peace may require a bit of cheer-me-up.  The Candidate by Alex Nunns should do precisely that for the convinced Corbynite with an account in riveting detail of Jeremy Corbyn’s rise to power which reads more like a thriller than a chronicle, and that’s a compliment by the way! And for the year ahead those plotting the downfall of Corbyn’s opposition from the Labour Right have the perfect Christmas present in the way of David Osland’s rewrite of the activist classic How to Select or Reselect Your MP.  The annual Socialist Register 2017 edition is entitled Rethinking Revolution with a range of fresh thinking on a great theme ranging from Corbynism , the European Left and South Africa’s ANC to radical change in Bolivia plus a range of essays questioning the legacy of 1917’s revolutionary model.

To understand the evolution of an historical tradition of thought and action there’s no better collection than the recently re-issued Antonio Gramsci Reader. This peerless thinker and revolutionary ’s writings 1916-1935 remain the single most important application of 1917 to the world after  WWI coinciding with the rise of interwar fascism, moreover they have stood the test of time better than most.  A new collection of Eric Hobsbawm’s writings on Latin America Viva La Revolucion is a wonderful way to explore how interpreting the world can enable us to change the world, to kind of misquote Marx.  Today such a philosophy, what was once called praxis, finds many different expressions in varied locations and situations.  One example is activist-photography on the frontline between the state of Israel and Palestinian resistance  which is the subject of Activestills edited by Vered Maimon and Shiraz Grinbaum.

In 2016, as 2015 and 2014 were too the pivot of radical change on this island remains Scotland. Voted against #ToryBrexit , for a social-democratic and green majority in favour of Scottish independence, led by the most impressive by far of all domestic party leaders. It is no surprise then that writing on Scotland and its politics produces some of the most thoughtful insights either north of, or all points south, of the border. Neil Davidson’s latest collection of richly intellectual essays Nation-States reinforces his reputation as the most creative author currently writing out of the Marxist tradition on the theories and intersections of a nationalist politics. Davidson’s writing combines critical analysis with a grand global overview. Scotland the Bold by Gerry Hassan is focussed more specifically on Scotland yet this liberates rather than restricts Gerry’s radical imaginary which he brilliantly applies to the present and future of this most turbulent of nations.

The dark side of versions of nationalism rooted not in liberation but blood and soil are covered in two powerfully critical memoirs. Gaby Weiner’s Tales of Loving and Leaving deserves to become a modern classic. This is a book that expertly yet effortlessly weaves family and generation into two of the most epic events of the Twentieth Century, the Russian Revolution and Hitler coming to power while linking both to a consequence that we continue to live with in the 21st century, mass migration.  Fascist in the Family is the kind of title to get the reader to sit up and take notice before they’ve even started thumbing through the pages. Left-wing writer Francis Beckett retells the story of his father, elected as Labour’s youngest MP at the 1924 General Election he became one of Oswald Mosley’s key allies in the British Union of Fascists until he found even this lot not Nazi enough and helped found the National Socialist League. Told with a brutal honesty, a book of horrific tragedy.

And the perfect gift to put under the tree for the activist who is anti-consumerist until he, or she, realises that means no pressies? The new edition of Verso’s Book Of Dissent will have ‘em whooping with revolutionary delight not just on the 25th but for the next twelve months too.  Though our favourite gift is another from Verso, their 2017 Radical Diary destined to resurrect the annual Big Red Diary that some of a certain political age will remember with fondness. Luxurious design,  historical dates and details, quotes, illustrated throughout, it has enough to turn the most dogged pessimist into an  optimist for the year ahead.

And our book of the seasonal quarter, our number one for Santa’s red list? Well we have two not one because we’ve chosen a theme and there is a pair such outstanding titles it has proved impossible to separate them so we recommend splashing out and getting both.  Trump, Farage the #brexit fallout, has seen a revival of a right wing populism built round a naked racism, and with Le Pen 2017 could be worse still. What we desperately need is a popular anti-racism, not talking to each other to confirm our own opinions but to reach out, not pandering to the haters and the misinformed but conversing  and where required challenging too.  Daniel Rachel’s superb Walls Come Tumbling Down chronicles one such effort, via music, from Rock against Racism via 2-Tone to Red Wedge.  A period when pop and politics, including Labour, learned how to work together towards what both understood in different ways as the common good. But no such effort would have been remotely possible without the singular experience of Rocking against Racism a story now retold via Reminiscences of RAR  edited by two who set it all up, Red Saunders and Roger Huddle. This a book full of such sublime enthusiasm and vision it can only leave the reader wondering why nothing remotely like it has come again and what we can do in 2017 to make that happen. Daniel Rachel’s book will help convince us of the pitfalls of simply recreating the past, Roger and Red’s that despite this when culture and politics click anything is possible. Now that’s one Christmas present worth having. 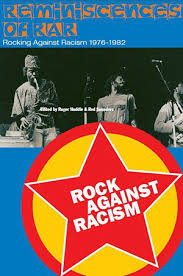 Note  No links in this review to Amazon, if you can avoid buying from tax dodgers, please do so.