Sociocracy. What is it and what happens when we use it?

Ever been spoken over at work? Or excluded from a decision-making process because of arbitrary classifications of authority in the workplace? I have. It struck me as both annoying and wasteful. So when myself and my business partner began our own social enterprise start up OpHouse in January 2020, we knew that we wanted to do a lot of things differently. This is where sociocracy comes in.

Sociocracy is a decision-making process pioneered by the Quakers. This way of doing business rejects the ‘predict-and-control’ approach to strategy that has been the mainstay of both the corporate and public sphere for a century. It can be helpful to imagine it as a collection of circles. Each circle is responsible for a certain part of the organisation, for example finance, marketing, or overall mission. 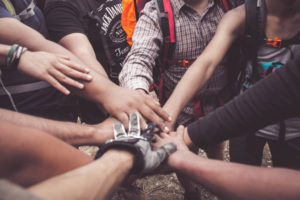 At the beginning of every meeting, whether with clients, colleagues, or external stakeholders, there is an emotional check-in. We find out how people are doing, what else is going on in their lives, and what kind of things are on their mind. Proposals for business strategy, community outreach, anything else on the agenda is proposed and passes through a series of brief rounds where everyone in the circle gives feedback similar to a SWOT (strengths, weaknesses, opportunities, and strengths) analysis. Unanimous approval is not required for an action to be taken, it only has to be good enough for now and safe enough to try.

Organisational decision making plays a vital role in the success of an enterprise. Its machinations are crucial to the well-being of staff and the effective execution of tasks. Most companies replicate an arcane business hierarchy that looks like a pyramid, with a few decision makers at the top supported from beneath by greater and greater numbers of staff with less and less authority the further down the pyramid you go. This can be ineffective for three key reasons.

It is ironic that so many businesses reproduce the pyramid structure given that innovation in all other areas is deemed to be so crucial for their survival. Many business models, like the economic framework that the business serve, are taught from textbooks that have changed little since the 1900s. The textbooks themselves are based on economic theory from the 1800s; there has been little innovation here.

Sociocratic business structure is innovative in the sense that not many companies do it yet, but it is old fashioned in the sense that it is essentially the model of playing fairly that our care givers likely encouraged us into when we were young. It is a structure of politely taking turns. The benefits of sociocracy can be summarised in three key points:

OpHouse is a very new company with lofty aims. We are working with the City of York Council, Homes England, and BlokBuild among others to bring the first tiny house development to York. We started this business because we believe in fairness; the housing market is not fair and the workplaces we have experienced also leave much to be desired. We hope that by using sociocracy, the form as well as the function of OpHouse will create more fair spaces.

We are looking for partners, funders, and friends. If you would like to be any of those things, please get in touch.

Alice Wilson is a PhD researcher at the University of York. Her thesis is examining the tiny house movement in the UK. Tweet her: @neither_both. Follow her research Instagram: @Tiny_House_Research_UK. Or email her: aew579@york.ac.uk.