Friday 5th February saw the official launch of Poverty (2nd ed.) by Ruth Lister, member of the House of Lords and vice-chair of Compass (the first edition was published in 2004). The event was facilitated by Barry Knight, author of Rethinking Poverty. Mubin Haq, CEO of the Standard Life Foundation and one of seven panellists, posed the question: ‘Do we need to challenge the status quo with sticking plaster or open-heart surgery?’ All the panellists showed a clear preference for open-heart surgery.

In this vein, Lister emphasised the importance of distinguishing between 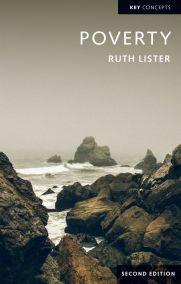 definitions/concepts and measures. Definitions distinguish between poverty and non-poverty. Measures are an imperfect way to operationalise definitions – and didn’t merit discussion. Rather the focus was on how we understand poverty, and what it’s like to be poor. Poverty is not just a disadvantaged and insecure economic condition, said Lister, but ‘a shameful and corrosive social relation’. This is consistent with sociologist Peter Townsend’s 1979 definition of relative poverty in terms of social exclusion, she said.

The importance of agency

A big focus in the book is different types of agency:

Agency is important because it contributes to the counter-narrative, said Lister. It creates dignity and respect and counters ‘othering’ and dehumanisation of people in poverty. Dignity and agency and the right to be seen as fully human are at the centre of the human rights approach to poverty. We must ‘move from the shame-inducing concept of social security, and address emotional wounds’. Social justice depends on listening. People in poverty want to begin the conversation about poverty, not be brought in at the end.

Listening to the voices of people in poverty

In response to a question from Knight about what has changed between 2004 and 2021, one thing Lister mentioned was ‘the growing recognition of the expertise of experience’. Much of it is lip service, she admitted, but organisations like the Commission on Social Security are bringing people together to develop their views and ‘that’s really positive’.

People in poverty are ‘the greatest experts on causes, experience and solutions to poverty’, said Bea Roberts of anti-poverty organisation ATD Fourth World. How do we involve and listen to them? Doing so will give people back their dignity. Some charities like ATD and APLE Collective have worked to give voice to the poor. This is a positive change, she admitted, but it’s not enough. Even if you have a voice, people need to listen and understand. People still dismiss the opinions of people in poverty. But the pandemic is changing this. ‘People always used to say nothing will happen until the middle classes have become poor. Now the middle classes are becoming poor and people are taking note.’

Haq sees helping to empower voices as a role foundations and charities can play. Agency is crucial: ‘we must give voice to those with lived experience, support movement building not just case studies’, for example trying to build a debtors’ movement. Gordon Brown in 2004 said there wasn’t enough on the demand side, voices from below, Knight reminded us.

Poverty as a human rights issue

There was widespread agreement that poverty should be seen as a human rights issue. It’s been a long, hard journey to have social and economic rights recognised as human rights, said human rights campaigner Francesca Klug, and most people are still not aware of these rights. But how can you be human without them?

She feels the government is uncomfortable with talk of human rights because it resonates with people. Philip Alston, the UN rapporteur on extreme poverty and human rights, provided a lens on what was happening in the UK and the language to evoke widespread horror. His 2019 report concluded that much of the glue holding society together had been ‘deliberately removed and replaced with a harsh and uncaring ethos’. Ministers dismissed his report as ‘barely believable’.

Human rights is the new material of activism, said Klug, ‘obscure if not brought to life by activists’. We need people to feel ‘a sense of burning injustice that our fellow human beings are living like this and not just be shocked at the size of food parcels’. Changes made by stealth won’t be good enough if not supported by this sense of injustice. This is a key reason why it was so easy for a Conservative government in 2010 to roll back improvements in welfare benefits and programmes like Sure Start introduced by the Labour government. The changes Labour introduced were not supported by a change in the narrative about poverty.

How do we change the narrative?

‘We need to deal with a level of ignorance first thing before tinkering with legislation.’ ‘People don’t imagine what it’s like to be poor.’ ‘Some like to blame others.’ So the question is how to win hearts and minds. We need a public that cares about this, it was generally agreed.

The narrative always seems to be about individuals in hardship. People shouldn’t be treated as case studies, said O’Hara. ‘It’s easy to dismiss as one person’s experience.’ One problem is that individual reporters are often dominated by the agendas of billionaire business owners. The media like to take single incidences, agreed Roberts. ‘We need to address how people think, how media cover issues.’ She recalls the BBC wanting to come and film her empty fridge – which understandably she found insulting. Does this mean she’s not poor if not actually hungry and starving? How poor do you need to be to be poor?

What influence will the book have?

Kate Green MP, Shadow Education Secretary and Labour child poverty spokesperson, expressed regret that ‘rich, informed discussion of poverty has disappeared from political discourse’. The issues around poverty were more widely understood 20 years ago among the ‘political classes’. But it is an academic book, and she wondered how widely it will be read by ‘those who most need to read it, i.e., the decision makers’ – though Klug commented that it was ‘one of the most accessible academic books she’d read’.

O’Hara shared Green’s doubt about who would read an academic book, but nevertheless saw it as ‘part of the rich reporting of activity going on around poverty, part of the wider stew challenging the way we talk about poverty. We can’t other all those now in poverty because of the pandemic.’

Does the pandemic present an opportunity?

Is there a danger the pandemic will reinforce the deserving/undeserving divide? Is the fact that attitudes are softening providing a window of opportunity? It’s important to show how many people are vulnerable to slipping into poverty, Haq pointed out. ‘It’s not something that happens just to a specific group that’s been poor forever.’ Unfortunately, said O’Hara, some MPs are still talking of the danger of people taking advantage of benefits, for example catching Covid in order to get a flat-rate payment. The government was clearly unwilling to make cash payments for children on free school meals rather than giving them vouchers or hampers.

Asked what she made of the current situation, Lister had negatives: ‘Poverty is getting worse and deeper; people are being pushed further below the line by cuts in social security. We are now talking of destitution and hunger, unexpected in a rich country in the 21st century.’ And positives: a November Ipsos Mori poll showed poverty and inequality were fourth among people’s concerns, ‘above the NHS!’

We need to integrate an anti-poverty strategy into a broader vision of a good society, said Lister, addressing inequality and the climate emergency.

Post-pandemic, we need to think about doing things differently and think about poverty as part of creating a good society, not just about a specific group of people. Now is the time to address how to make a good society.

The meeting ended with Lister reading the poem All People, All Human by poverty campaigner Moraene Roberts, Bea Robert’s mother. There could have been no clearer – or more moving – statement of how and why the narrative about poverty needs to change.

Caroline Hartnell is convener of the Rethinking Poverty blog.